This spring, we have been fortunate to make contact with Honors Program alumni Laurel Gustafson who has graciously agreed to write the following post for us. Laurel graduated in 2003 with a B.S. in Recreation, Parks and Leisure Services. She then went on and received her M.S. in Experimental Education in 2014. Soon after receiving her second degree, Laurel and her husband decided to travel the country while living out of their van- an experience that changed their lives forever. Here is the story of their journey.

Continued Education Down a Non-Traditional Path

Paying tuition has been a regular commitment to my learning. As the sole contributor to my undergraduate degree, it was an exciting moment to pay off loan debt within 5 years of graduating. It wasn’t that my degree in Recreation, Parks and Leisure Services led to a high-paying job; I prioritized my spending and got rid of a large, outstanding payment. A payment for a rich time of growth in and out of the classroom that set the stage for future decisions.

In 2014, my husband asked me if we could quit our jobs to travel full time. 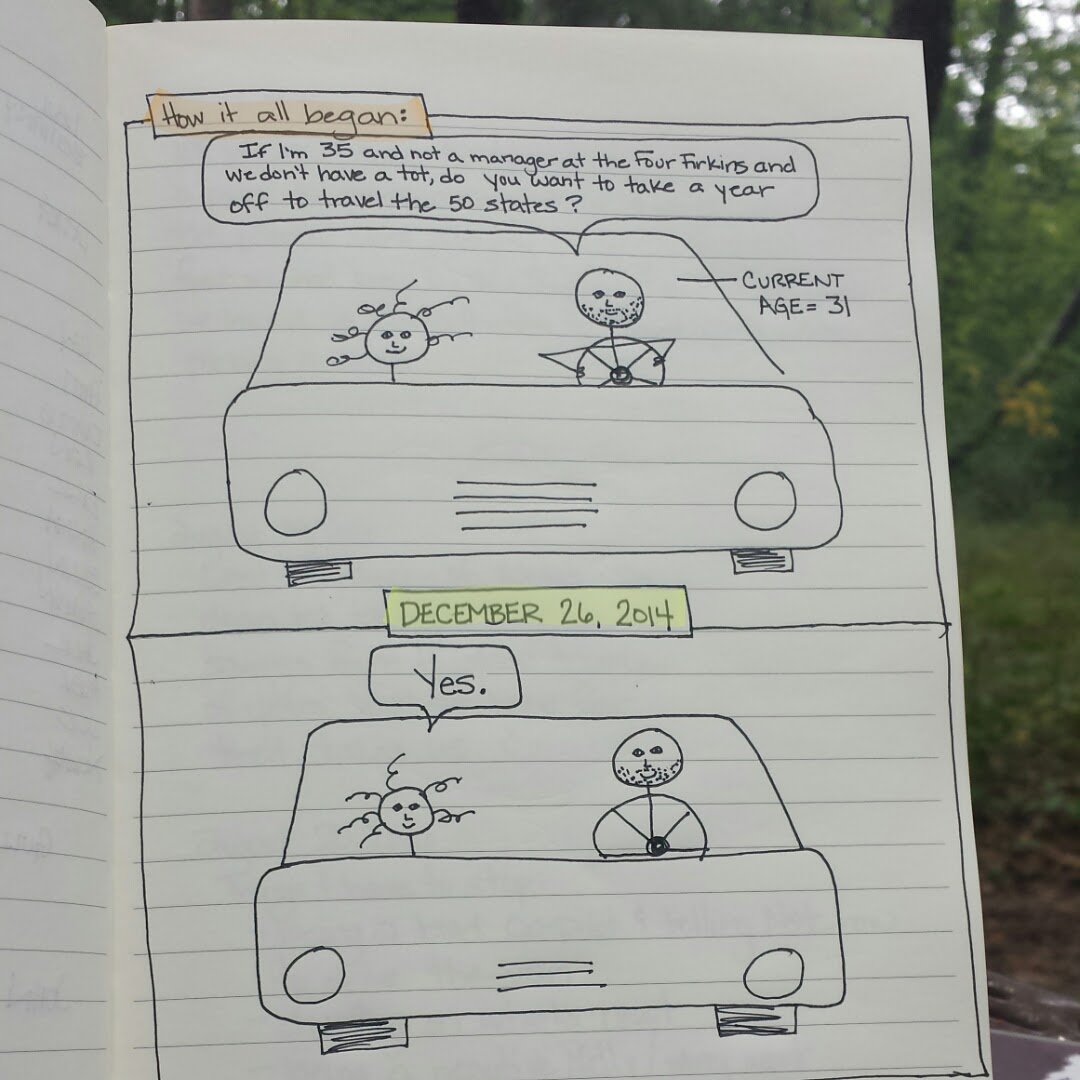 Caption: How we made our decision to travel.

Having experience in prioritizing a budget paid off significantly. In our new lifestyle, we’d pay tuition yet again for an education, but this time we would scatter those tuition payments to many parks, donut shops, gas stations, and grocery stores across the US.

In July of 2016, we turned over our keys to our rental space and proceeded to sleep in that parking lot for a week. I know, you’re thinking: how glamorous! My husband finished his work commitments with Minnesota State University Mankato during that time, and we started to figure out what it would be like to use public bathrooms all the time. It wasn’t until we crossed the state line into Wisconsin that we felt we had started this journey, which had been 18 months of saving, dreaming, and changing to our new normal. 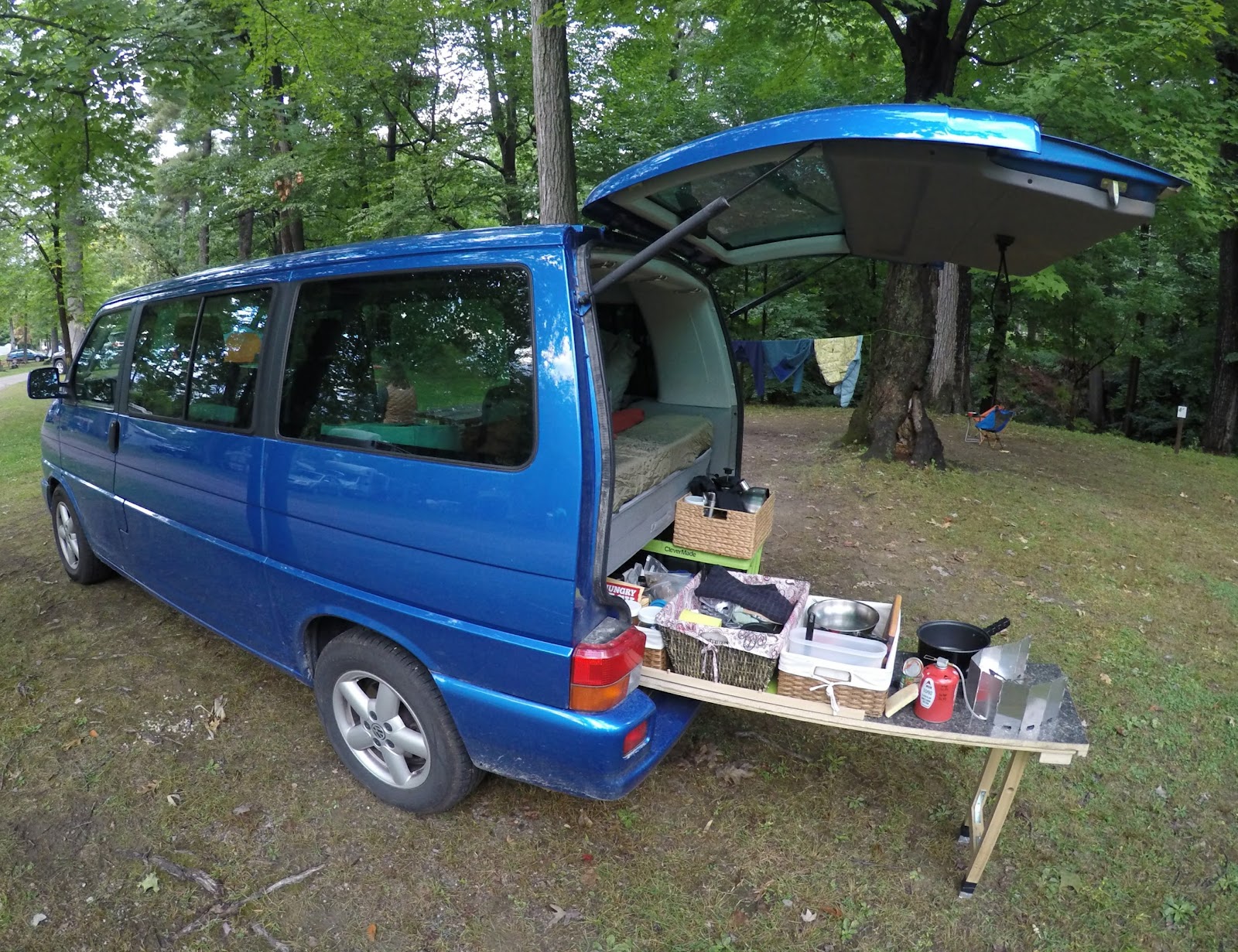 Caption: The kitchen we built under our bed in our 2003 VW Eurovan.

We had a rough guideline of where to travel but no detailed agenda. Our overnight stays consisted of state parks, state & national forests, Walmart & Cabela’s parking lots, homes of friends & family, and a few hotels. We loved the Upper Peninsula of Michigan and stayed there longer than we thought we would. We booked a 1-week camping stay in Acadia National Park long before we were certain we could endure an October night sleeping in our uninsulated van in Maine. Our timing of traveling south followed near-peak leaf season that fall.

There was a time in this drive south when we questioned all of our travels. We spent another night in a parking lot. Another night resting between Point A and Point Unknown. It was our decision to stop that was our best decision. We didn’t stop traveling, we stopped moving. We spent more time at each location. We lingered. We finally stopped letting the busyness of our society control our thoughts. Eight days walking the beaches of the Outer Banks during the 2016 presidential election. All we had for a connection was a slider phone that could call and send texts. No data. No cable. No Netflix. Using older phones with spotty wifi at public locations was how we stayed in touch. Although it took a while to break away from the feeling of needing to be connected, it was a refreshing moment to realize how much reflection I had been doing in lieu of the bombardment of news and ads and Facebook likes.

That turning point led to two of our favorite parts of our travels. Although our initial thoughts of traveling had us on the West Coast at this point, we kept returning to New England. We discovered a house-sitting opportunity in New Hampshire and spent the month of March 2017 in an 1800’s post and beam home nestled south of the White Mountains. The homeowners (now dear friends) entrusted us to take care of their dog, three cats, and home through a season of potential nor’easters. Amazing. 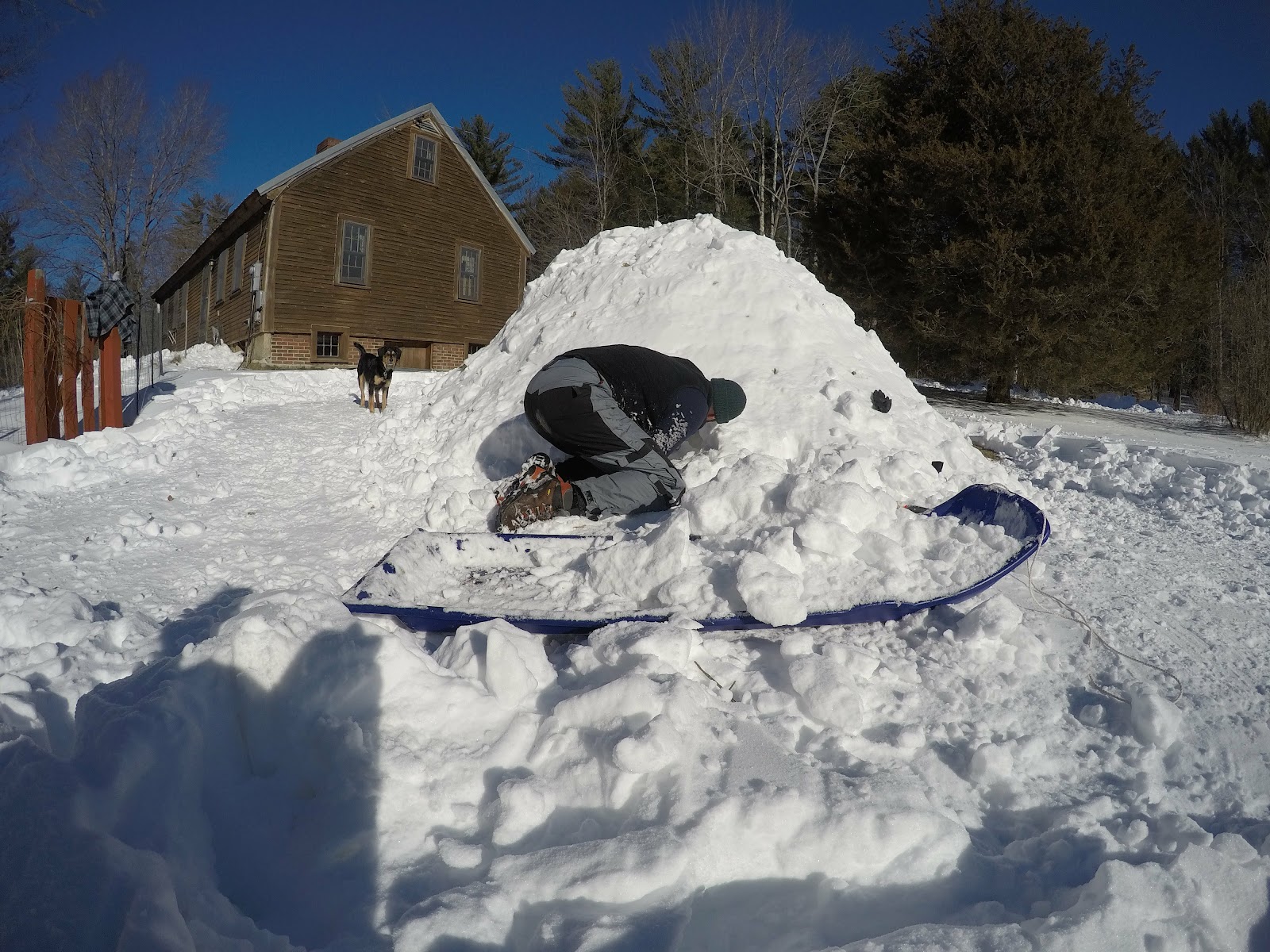 Caption: Building a snow quinzee after a nor’easter in New Hampshire.

Another rewarding season of our trip was finding a WWOOFing [World Wide Opportunities on Organic Farms] location that invited us to stay on a private island off the coast of Maine. In April 2017, we stepped onto a boat and were welcomed to the working family of this island farm. We started chores before the sunrise. We gardened. We set up fencing for animals. We cleaned barns. We assisted in lambing season. We made butter and ice cream from fresh cream. We picked things up and put things down. I worked on a life-struggle while being so far removed from my normal circle of support. I cried. We laughed. We worked on it. We basked in the sunrises and could often be found sleeping before the sun set. We jumped in the ocean on a nice day and hunkered down tight during the moments of ruthless waves and high tides. We were immersed in a world new to us, and we learned. We learned a lot. 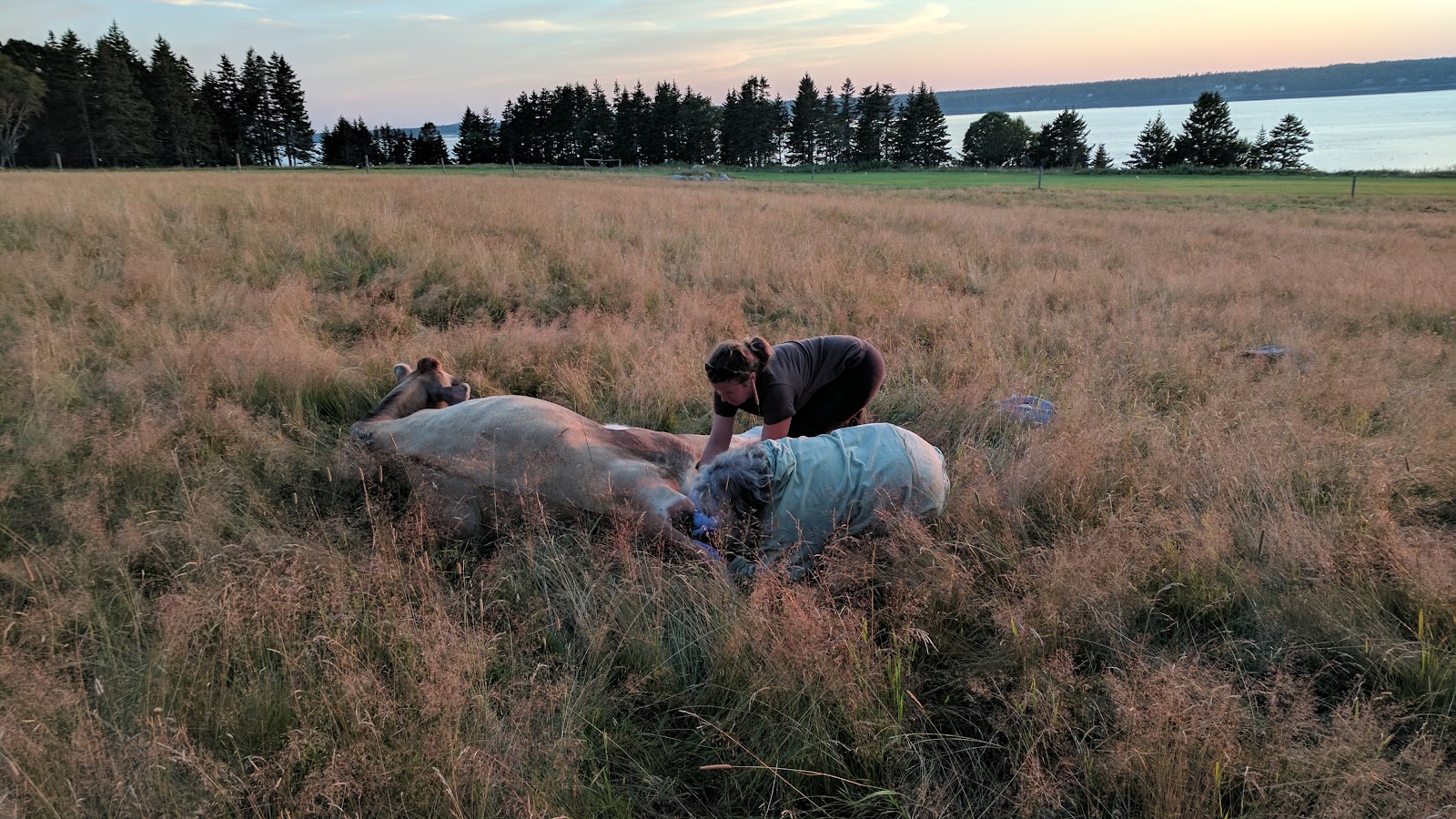 Caption: Assisting in birthing a calf on the island farm.

Overall, we didn’t know when this segment of our life would change until it changed. We found out we were expecting the baby we were told would probably never happen. It was the birth of our daughter that brought us back to our home state of Minnesota, but our mindset of collecting new experiences has never left us. The value obtained from paying tuition when ready to soak up life is never a question.

“If we thought we had to know what we were doing before we began, we would never have started.”

*Each hyperlink in the story is to a different social media site used to keep our friends and family updated on our travels. We’re not professional photographers, journalists, or videographers. We just did it; taking some pictures, notes, videos along the way.